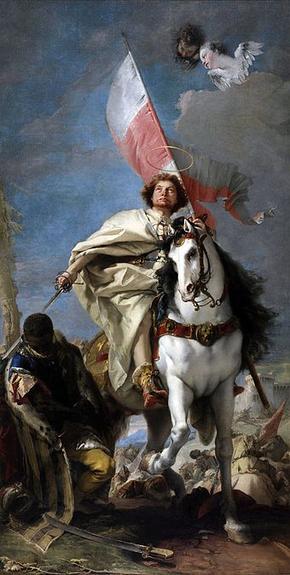 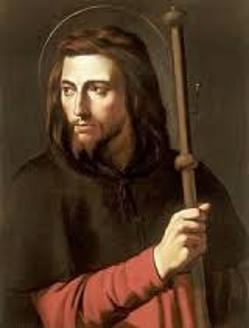 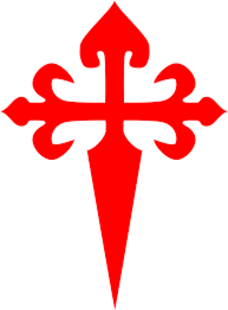 Who w​as St James the Great?

James, son of Zebedee was one of the Twelve Apostles of Jesus. He is called James the Great to distinguish him from James, son of Alphaeus and James the brother of Jesus (James the Just).

He was born around 3AD in Bethsaida. Zebedee, his father, was a fisherman of the Sea of Galilee, who probably lived in nearby Bethsaida. Salome, his mother, was one of the pious women who followed Jesus, attended the crucifixion and also discovered that Jesus was risen from the dead. He was the brother of John, the beloved disciple, and probably the elder of the two.

​James is described as one of the first disciples to join Jesus. James and John were with their father by the seashore when Jesus called them to follow him (Matt. 4:21) (Mark 1:19-20). James was one of only three apostles whom Jesus selected to bear witness to his Transfiguration.

The Acts of the Apostles records that "Herod the king" had James executed by the sword (beheaded). He is the only apostle whose martyrdom is recorded in the New Testament. He is, thus, traditionally believed to be the first of the twelve apostles martyred for his faith (Acts 12:1-2). This may have been caused by James's fiery temper, for which he and his brother earned the nickname Boanerges or "Sons of Thunder" (Mark 3:17). The site of martyrdom is located within the Armenian Apostolic Cathedral of St. James in the Armenian Quarter of Jerusalem. His head is buried under the altar, marked by a piece of red marble and surrounded by six votive lamps.​

St James is often pictured with a pilgrim's hat and staff. He is patron of veterinarians, equestrians, furriers, tanners, pharmacists and oysterfishing.

​One story states that St James miraculously appeared to fight for the Christian army during the legendary battle of Clavijo, and was henceforth called Santiago Matamoros (Saint James the Moor-slayer). ¡Santiago, y cierra, España! ("St. James and strike for Spain") was the traditional battle cry of medieval Spanish (Christian) armies.

James had a special place in the Central African Kingdom of Kongo because of his association with the founding of Christianity in the country in the late 15th century. King Afonso I of Kongo, the second Christian king, whose Kongo name was Mvemba a Nzinga, was facing his brother Mpanzu a Kitima, in battle. He reported that a vision of Saint James and the Heavenly Host appeared in the sky, frightened Mpanzu a Kitima's soldiers, and gave Afonso the victory. As a result, he declared that Saint James' feast day (25 July) be celebrated as a national holiday.

The Church of Jesus Christ of Latter-day Saints teaches that James has been resurrected and that in 1829 he, along with the resurrected Peter and the translated John, visited Joseph Smith and Oliver Cowdery and restored the priesthood authority with apostolic succession to earth.

The Way of St James

​Saint James is the patron saint of Spain and Portugal, and according to legend, his remains are held in Santiago de Compostela in Galicia, Spain. (The name Santiago is the local evolution of Vulgar Latin Sanctu Iacobu, "Saint James".) The traditional pilgrimage to the grave of the saint, known as the "Way of St. James", has been the most popular pilgrimage for Western European Catholics from the Early Middle Ages onwards. Some 237,886 pilgrims registered in 2014 as having completed the final 100 km walk to Santiago to qualify for a Compostela. The feast day of St. James is celebrated on 25 July. When 25 July falls on a Sunday, it is a "Jubilee" year (an Año Santo Jubilar Compostelano or Año Santo Jacobeo) and a special east door is opened for entrance into Santiago Cathedral.​

The Way of St. James is a trio of routes that cross Western Europe and arrive at Santiago through Northern Spain.

There are debates about the origins of the pilgrimage but the most accepted story is that Saint James had spent many years spreading the gospel in Spain, so his followers brought his body back to Galicia for burial where it was forgotten for 750 years.

Then, early in the 9th century, Pelagius, a hermit, had a vision of a bright star surrounded by a ring of smaller ones shining over a deserted spot in the hills. This led to the discovery of the tomb of Saint James. A church and small monastery were built around the tomb. A town grew up known as 'Campus de la Stella', field of stars, later truncated to 'Compostela'. The present day cathedral evolved around the tomb over many centuries.

The translation of St James relics from Judea to Galicia was effected, in legend, by a series of miraculous happenings. According to ancient local tradition, on 2 January AD 40, the Virgin Mary appeared to James on the bank of the Ebro River at Caesaraugusta, while he was preaching the Gospel. Following that apparition, St. James returned to Judea, where he was beheaded by King Herod Agrippa I. His disciples carried his body to the shore and placed it in a rudderless stone boat which was guided by the angles and the wind beyond the Pillars of Hercules (the straits of Gibraltar), to where it landed at Padrón on the coast of Galicia. The local Queen, Lupa, provided the team of oxen used to draw the body from Padrón to the site of the marble tomb for burial at the place where stands Santiago de Compostela Cathedral. 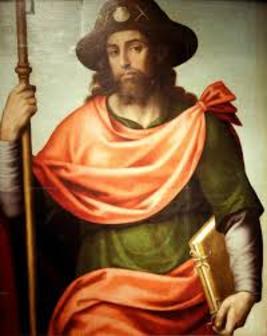 The military Order of Santiago, named after James, was founded in Spain in the 12th century. Its initial objective was to protect the pilgrims of St. James' Way, to defend Christendom and to remove the Moors from the Iberian Peninsula. Duties added in 1655 included defence of the belief in the Immaculate Conception of Mary. Later the membership became a mark of honor.

The Order of Santiago still exists under the protection of the Spanish crown. As of 2014, there were 35 knights and 30 novices in the order. Admission to the order is open to applicants of noble blood. The applicant must be a practicing Catholic, be of legitimate birth through both parents and grandparents, not be descended from non-Christians, and prove at least 200 years of confirmed nobility of birth.

The Order's insignia is a red cross resembling a sword, with the shape of a fleur-de-lis on the hilt and the arms. The knights wore the cross stamped on the royal standard and white cape. The cross of the royal standard had a Mediterranean scallop in the center and another one at the end of each arm.

The three fleurs-de-lis represent "honor without stain", which is in reference to the moral features of the Apostle's character.

The sword represents the chivalrous character of the St. James and his martyrdom, since he was decapitated with a sword.

It is said that its shape originated in the era of the Crusades, when the knights took with them small crosses with sharpened bottoms to stick them in the ground and carry out their daily devotions.